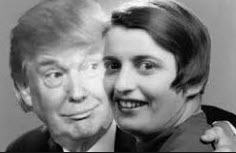 You may not have heard of the Russian émigré Alisa Zinovyevna Rosenbaum (1905 – 1982). Better known by her pen name as a novelist and New York-based political philosopher, Ayn Rand remains somewhat marginal. But in today’s political climate, on both sides of the Atlantic, Rand and her particular form of right-wing philosophy called Objectivism show signs of returning to the political mainstream.

Once the darling of young Thatcherites, Rand’s thinking and her adjective ‘Randian’ is now being applied to Donald Trump and other neoliberals’ beliefs and actions. Trump cites Rand’s 1943 novel The Fountainhead as one of his three favourite books. Her magnum opus Atlas Shrugged (1953, almost 1200 pages) is also getting more mentions. We the Living is her Study Guide. Her novels rank more highly than those of Mark Twain or C S Lewis.

Her views are gaining traction in the UK with the appointment of Sajid Javid as the new UK Home Secretary, Rand’s work made a big impression on him when he was a student, and twice a year he still reads the famous courtroom scene in The Fountainhead, reminding himself that “It’s about the power of the individual. About sticking up for your beliefs, against popular opinion. Being that individual that really believes in something and goes for it.” Javid admires the book’s hero when he declares his principles and his willingness to be imprisoned for them if need be.

Taken alongside the apparently anodyne advice ‘to be the best you can be’ and ‘You can do anything you want when you put your mind to it’, it seems harmless enough. For her supporters, her seven principles of Objectivism were a blueprint for individual success: rationality, independence, integrity, honesty, justice, productiveness and pride.

Superficially, it would seem to be a basis for the sort of leadership that many admire – but only if you believe in single-minded, no-nonsense strong leaders (who don’t go on to become hubristic dictators) and if you give more weight to leaders’ personality than to the leadership process (such as governance, checks and balances).

The notion of individuals being largely unaffected by the system they are swimming in, is delusory, hubristic and dangerous. When they try to push through their ideas against the odds, they do no end of harm. Witness frequent design changes to the education and criminal justice systems.

Jonathan Freedland saw the downside of Rand’s philosophy, summing it up as: ‘rugged, uncompromising individualism – of contempt for both the state and the lazy, conformist world of the corporate boardroom’ (The Guardian, ‘The new age of Ayn Rand: how she won over Trump and Silicon Valley’).

What sort of leadership will Sajid Javid bring to the Home Office?

Given his admiration for aspects of Rand’s writing, will Javid also endorse:
• her assertion that there are two sides to every issue: one side is right and the other is wrong, but the middle is always evil?
• her denouncement of altruism ‘Selfless man doesn’t think, feel, judge nor act. Selfishness is the engine of the economy?
• her insistence on the individual working in isolation ‘The collective brain cannot think and has no thoughts’?

In Freeland’s words: ‘Rand lionises the alpha male capitalist entrepreneur, the man of action who towers over the little people and the pettifogging bureaucrats’.

If Ayn Rand were alive today, there is little doubt that she would have no truck with anything systemic. She seems oblivious to the significance of relationships and the multiple interconnections within systems.

A different kind of leadership from the Randian model is badly needed: one that:
• embraces the reality of leadership by many individuals, not just the anointed few
• recognises the need for strong processes that connect to each other, to other stakeholders and to the system as a whole
• requires that those with leadership authority safeguard and improve the health of the system
• puts leadership at the service of the system rather than the system serving the leader.

Will the Home Office receive this sort of leadership?

Sajid Javid seems to be making a good start. Out of 8,000 removal and deportation records for Caribbean nationals aged 45 and over who could have benefitted from provisions in the 1971 Immigration Act protecting their right to be in the UK, his department has identified 63 possible cases of wrongful removal, and the number is expected to rise.

However, whilst his words and actions demonstrate a welcome concern and determination to right the wrongs of the ‘hostile environment’ created by recent immigration policy, we must also hope that his eyes are open to the need to think systemically. A Randian focus on individual highlighted cases will not address the deeply embedded cultural and systemic causes that gave rise to the scandal.

Related articles:
Seeing the system clearly (1st May)
Are we individuals or people at work (30th March)