Are we ‘individuals’ or ‘people’ at work? 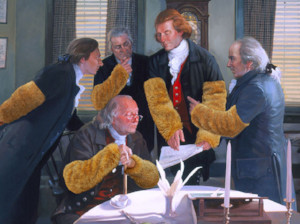 Lessons from the right to bear arms

School shootings in the US receive much discussion. In 1977 the National Rifle Association won an important argument in the US Senate. Lawyers decided that the original US constitution’s 1791 Second Amendment reference to the right of “the people” to keep and bear arms should be taken to mean the right of “individuals”. Individuals? People? What’s going on here? And how is this played out every day in the world of business?

In the US context the people were conceived as acting together as part of a militia ready to resist an oppressive federal US army modelled on the lines of the hated British redcoats in the Revolutionary War. The people were very wary of a standing army. They wanted to limit the power of the state, top-down control if you will. So ‘the people’ had this collective dimension. They had in mind a particular context, that of militias of citizen soldiers.

As well as that, the Bill of Rights was building on the rights of ‘individuals’ in English law. Privileging individuals in western society has a long tradition behind it. And that’s the problem – from a systemic perspective and in today’s world.

This leads us to a ‘wholes versus parts’ argument, which is an important distinction in systems thinking. To see this, consider what happens when you put individuals (clearly a ‘part’ in systems terms) into the context of improving an organisation’s performance?  That’s the subject of this week’s highlighted resource (Resource No. 27:  How to appraise performance systemically.)

What is the relevant context in most performance discussions? Where is the collective element? How does the relationship that an individual has with the boss and colleagues, with other departments, and with the wider system, constrain, explain or trigger that individuals’ behaviour and performance? Seen like this, we can see that we need to inject a ‘whole systems’ perspective into performance discussions. Let the system enter the room and be part of the conversation.

In systems thinking, the notion of individuals is contested – we would be better talking about people. The point is that, however isolated and accountable we may feel, none of us is really acting alone. We are all connected. With our cause. With other people, colleagues and teams. With the system that we are swimming in. With the unwritten rules and pressures to conform, to behave hierarchically and obey.

Seen like this, the idea of treating an individual in isolation is a nonsense when trying to improve performance, especially the performance of the organisation. The sum of the parts is less than the whole. So what is missing? Answer: the hidden glue that connects it all together. How we relate – both to things in our system and to other people. Call Jo McHale to explore and discuss.

If the context of “the people” has changed since the Second Amendment over two hundred years ago, so it has in business. Managing organisations today is trapped in its 100 years old history of scientific management, whilst science has moved on. Business needs to be freed from out-of-date mental models. What is the role of the people now? We’ll discuss that another time.