Can there be one right way to do anything socially complex? 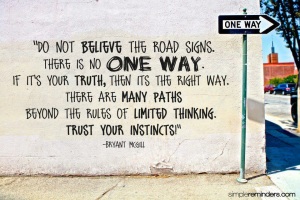 Lists of required practices, behaviours, skills and knowledge are popular in large organisations, both public and private. They constitute an organisation’s attempt to specify, measure and apply what it claims is best practice. Professional institutes promote their own versions.

But is best practice a good thing to aim for? Surely it must be. But complexity science says otherwise.

Such frameworks have had a good run – for 30 years or more.  Much faith has been invested not only in such frameworks but in the very idea of best practice itself – an idea that is now being questioned for social activity such as management and leadership.

Everything that lives begins its life, grows, matures, wanes and dies – though escape from this pattern is possible, as explained in How to interpret your S-curve lifecycle (details below). Even an idea experiences this pattern. The idea of best practice has passed its zenith. Its replacement, ‘good practice’, is a more flexible and plural variant better suited to the context of managing and leading. 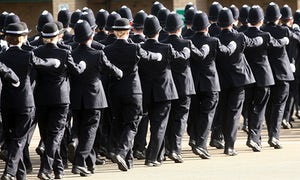 The image of the police marching in step hides an important truth: that sometimes it’s necessary to break rank and circumvent the rules. It’s part of a manager’s job to make this call – yet there are powerful systemic forces that work against this:

When a child got into difficulties in a shallow pond, the police officers at the scene were directed to act in accordance with the complex risk-averse system that decreed they should not attempt a rescue themselves.They obeyed the rules and were told to await the fully equipped and trained Fire and Rescue service. By the time the emergency service reached the scene, the child had drowned. (The background to this is discussed on page 4 in this article.)

In a different case, a police officer took a seriously ill woman to hospital in his car instead of waiting for an ambulance. It is claimed that he saved her life, yet he was disciplined for breaking the rules.

As leaders begin to understand and embrace the profound ramifications of complexity science, the penny drops that organisations need to rethink many long-held beliefs of management and leadership lore. Complexity science challenges certainty, plans, predictions, and assumed linear connections (‘if that, then this’).

Best practice wilts under the weight of practical evidence. Even reliance on experts is taking a bit of a knock.

A good way to be a GP

A friend of mine, a long-standing GP, popular with his patients, recently had his licence withdrawn. Why? Because he had failed to demonstrate compliance with the Care Quality Commission’s framework for GP practices. The trouble is that there is no single, best or right way to be a good GP. There are many ways to be a good GP.

The flawed thinking arises when an external authority produces a framework for a client that sounds plausible. The framework satisfies a client’s wish for a single specification of activity that is naturally diverse and contestable.

A client (let’s say a county council) claims that there is just one way of managing and leading in this council (“We need to be different from other councils, but inside we all need to be singing to the same hymn sheet”). The client also wants a means of judging people and making them compliant with their hierarchical dogma. This approach appeals to bureaucracies and powerful hierarchies. But it is specious and hypocritical. And it leads to disengagement and much wasted time.

The aspect of power is little acknowledged; the subject verges on being one of an organisation’s undiscussables. (This is discussed in How to make the undiscussable discussable: details below.) Don’t underestimate the unspoken power of hierarchies. It is not for nothing that our website’s strapline is ‘liberating leadership’.

My old-fashioned GP friend operated out of an old church. There were some cobwebs high up in the ceiling, well out of harm’s way. But, in the inspector’s mind, every best-practice GP premises must be clear of such sources of dirt and contamination. Fail! The GP had two staff and two doors to his premises, yet was required to keep records of fire drills for his two staff. He didn’t. Fail!

There were several more such examples where his paperwork was incomplete. In the subsequent prosecution, the regulator’s perspective was expressed to the court like this: (paraphrasing):

“We have rules and regulations designed to ensure good safety and probity. We expect evidence of compliance with these. Failure to demonstrate this to our satisfaction thus becomes a definition of errant and outlawed practice. This GP practice failed to comply, is therefore unsafe, and must be closed forthwith.”

Too honest for his own good, the GP admitted to the court that he had failed to comply with the regulator’s framework, especially on which drugs to prescribe. (He wanted more discretion over his diagnoses, and he wanted to spend more than the allocated 10 minutes getting to know his patients.) After some personal agonising, the judge said that, sadly, she had no choice but to find the GP’s practice dangerous, based on his own admission.

The judge expressed her misgivings and seemed (to the defendant) to be on the verge of displaying leadership, but she too felt that she had to comply with a fixed model of her profession’s rules. ‘Guilty as charged.’ (This is explored in How to clarify perceptions of leadership action to take: details below.)

Sometimes what’s best, good, or maybe good enough, can be found at the extremes of the bell curve. Such was the case here. It’s ironic that this very same GP won the ‘Positive Deviancy Leader of the Year 2016’ award. He was and is no paragon, but good for him! He did what he thought was best for his patients – and they were grateful to him for that. His pioneering work on the increasing mass-industrialisation of medicine at the expense of local discretion and context is described in the article From Family to Factory.