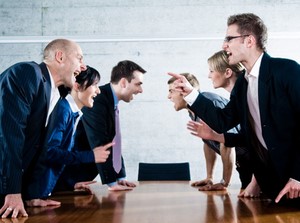 Projecting one’s shadow onto others

According to Carl Jung’s work, individuals seek comfort and enhanced self-esteem by casting their less pleasing aspects into their unconscious shadow. They can then pretend – especially to themselves – that these traits don’t exist. We all recognise the person who, having difficulty understanding something, blames the other person for explaining it badly – to make themselves feel better. That way they can claim that the problem is with the other person: ‘they need to change; I don’t’.

Technically, this is how the psychological phenomenon of ‘projection’ works: unconsciously disowned characteristics in one’s shadow that need to be displaced find themselves projected onto someone else (known as a ‘screen’). That way the originator can then criticise, blame and find fault in these weaknesses, while doing so at the expense of others and not of him/herself.

An extreme but well-known example is that of the political leader who is a closet homosexual who cannot face up to that fact and thus persecutes the country’s homosexuals. Such behaviour is mirrored in the armed forces. Even in business organisations an exaggerated response to sexual revelations may be similarly motivated.

There is a price to be paid for projection: not only is it (unconsciously) dishonest and unfair, and a source of interpersonal conflict. There is no space or reason for learning and therefore no impetus for self-improvement. It also places a burden on leaders, raising unrealistic expectations.

The projection phenomenon has its organisational parallel, and this holds ramifications for leadership and group behaviou

The above illustrates the consequence of projection for individuals and their employing organisation. But we can go further: what is true of individuals is also true of groups. Organisations may display dysfunctional behaviour based on group shadows that are conveniently projected onto other groups, whom the first group then loads with an ‘enemy image’, as, for example between the marketing and operations departments.

The practice operates at a national level too. US President Ronald Reagan thus invented Russia as the ‘evil empire’, replete with many of the self-same traits that other countries were in turn projecting onto the United States and its government – territorial ambition, military hostility, world domination, etc.

In his own eyes Reagan’s motives were probably as white as the driven snow. But it may not be fanciful to suggest that international misunderstandings, animosity and hostilities can result from projecting onto the other party what may be one’s own suppressed group shame, even if only between the marketing and operations departments! Recognising, understanding and managing this phenomenon holds implications for leadership, not just at an organisational level but in a global context as well.[divider]

Based on Chapter 13, ‘Leadership and the Shadow’ in The Search for Leadership, An Organisational Perspective.

You may like to assess your organisation in the corresponding section in the Systemic Leadership Toolkit.