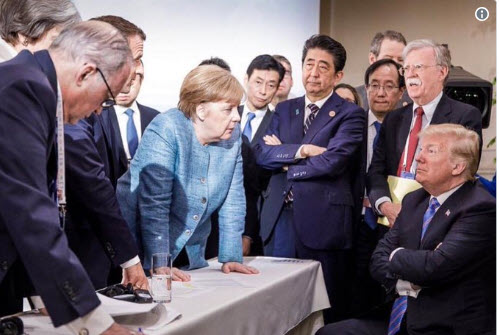 Just a short newsletter this time – though there is no shortage of stories about leadership in the world right now.

Donald Trump is again centre stage – at the G7 meeting in Quebec of leaders of the world’s seven largest advanced economies, or meeting North Korea’s Kim Jong-un in Singapore.

A couple of weeks ago I wrote about the philosophy and the writing of Ayn Rand, scourge of liberal-minded thinkers. Trump is one of her admirers. And it shows. An arch proponent of individualism, Rand denigrated collective spirit and activism. What would she make of G7 endeavours? Not much I expect. For the sake of this planet (climate change, loss of biodiversity, immigrants from north Africa being denied a port for their boat to land in, to take a small sample of today’s leadership issues) it is important that G6 leaders respect each other and the economies they represent.

But Trump arrives late, humiliates his fellow leaders, leaves early, and tears up the communique he signed. Then he’s on to Singapore, where he will assess Kim Jong-un in less than a minute, he claims, hoping to declare the end of the 68 years-old Korean War, and much more, having his eye on the Nobel Peace Prize, as he himself admits. There is no recognition by Trump of collective worth and collective activity. It’s him, him, like an under-developed child.

I am reminded here of a brilliant account by musicologist Stephen Johnson on the music of Dimitri Shostakovich. Johnson talks about the I/we dynamic in his music – the composer’s balancing and interplay between coming from the I position and coming from the We position. Both matter. When is Shostakovich and his music speaking about his own suffering, and when reflecting the suffering of all those living under Joseph Stalin’s reign of terror? And when is he attempting to speak to each one of us individually, and when to us en-masse?

Musically, you can hear this in the music. An oboe plays a plaintiff solo tune, to which all the orchestra’s violins respond, and so on. Johnson has written a wonderful little book about the ”I and the ‘We’ in Shostakovich’s music and in his own life and suffering from acute depression. Randian thought is all about promoting self-interest. I wonder what on earth would Ayn Rand have made of Shostakovich’s music speaking to the collective suffering? Not much, I suspect. And what would Trump make of that?

Some supporters of Margaret Thatcher express a belief in Rand’s anti-collective philosophy. But Thatcher occupied a curious position. She successfully negotiated and supported the Maastricht Treaty, then Trump-like she quickly regretted it and railed against it and all its adherents. But, also Trump-like, she admired and valued strong autocratic leaders like herself. At Maastricht, in the Netherlands, she announced ‘I will fight hard for Britain, and I expect all the other European nations’ leaders will fight just as hard for their own countries’. She didn’t want weak opposition and easy victories.

I remember some Dutch colleagues at the time (early 1990s) saying ‘What is all this about “battles”. Here in the Netherlands we believe in seeking the common ground. And why in UK hotels are public rooms named after military heroes and victories?’ Why indeed? There is a feminine versus masculine leadership style thing here. Anthropologically, the Anglo-Saxon world favours masculine-related values such as winning fights, the Netherlands feminine-related ones such as support and nurturing.

Trump admires strong autocratic leaders, like himself. But if they win the argument he derides them as weak. He is one mixed-up kid. But leaders have followers, and Trump has many in a collective mirror image of himself. They will probably vote him in for a second turn in 2020. Picking winners and losers in the leadership stakes is a mug’s game. Fred Goodwin (Fred the Shred) found that out when the Sir cap no longer fitted. Will Donald Trump fly too close to the sun and come crashing down? I doubt he would notice, let alone learn from the experience. Sensitivity is a foreign country.