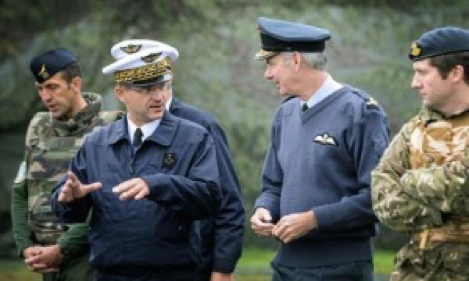 A large UK Royal Air Force station requested assistance with concerns over how well the management hierarchy was working and how it could be improved. There was also said to be a major silo problem between departments.

The general issue was addressed using an audit tool. A mixed sample of staff was chosen to represent the various grade levels. An example of dysfunction that surfaced was this: Wing commanders (effectively departmental heads) were being tied down in their work by an excess of minor issues being passed to them for approval or decision. They bemoaned that more junior officers were unwilling to take decisions themselves. But those more junior officers complained that they were not trusted and were not expected to take those decisions but were instead required to pass all matters up the chain of command.

Other issues that surfaced during the study concerned the short tenure period of a commanding officer (usually around two years) during which the incumbent was polishing his CV for his next promotion and showing concerns for his legacy. High-flyers were treated by the 8000 staff as ‘not one of us’; i.e. long-serving at that particular base. Alternatively, sometimes a commanding officer would be seen as settling for an easy winding down before retirement. As a result of this, the question of how much hunger there was for change and whether there was a willingness to court unpopularity surfaced, as did the matter of which issues were not politically discussable in the organisation.

There was an unhelpful perception that true leadership was defined as only coming into play when lives were being put at stake; all else was considered to be management. The consultants challenged this position, believing that it constrained possible leadership activity. At the same time there was a move towards many previously uniformed jobs being filled by civilians whose attitude towards aspects of the culture were rather different and less entrenched in hierarchical traditions.

Overall, this part of the exercise was about holding up a frank mirror to the senior management team revealing what was happening in the organisation which they could not themselves see because they were too close to it, and there was no data, and no one was formally permitted to talk about such things.

For information on the silo issue, please see the sample project ‘Dismantling silos’.

Further detail about this assignment is set out in the book The Search for Leadership.

Diagnostic help is available through The Systemic Leadership Toolkit and the various tools in the website’s Resources Section.