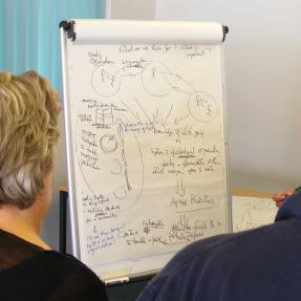 SCiO is a social enterprise and not for profit organisation owned by its members. It has three main objectives:

Created initially by a network of practitioners in the North of England, SCiO acts as an extra channel for disseminating to others their experience of practical applications, education and research in complex problem solving.

Over the last sixty years the new disciplines of ‘Systems Thinking’ and ‘Managerial Cybernetics’ have emerged. The new thinking started from the consideration of complex problems faced during the Second World War; then later in the 1970’s the same patterns of thinking emerged with the new awareness of the complexity of ecological problems. The ideas developed and spread into other areas of science and in particular into management. In the last thirty years new insights and understanding have developed in the way to approach apparently intractable problems in many areas.