Tough on targets and tough on the causes of targets 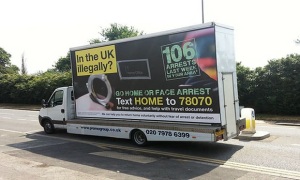 Targets are a popular management tool in many organisations. They are hard-wired into the hierarchically dominant scientific management model (long out of date in the face of the new sciences of systems and complexity, but that’s another story). The Home office is said to be run on a target culture. Yet we know from media horror stories that targets have a significant downside. Over an intense few days, Rudd found this out to her cost.

Despite targets’ faults and general unease with some of their results, the public likes to know what targets there are and what progress is being made against them. Targets therefore serve a useful communication and political purpose. But they are two-edged. Targets are what is known (in systems-speak) as a ‘double bind’: you risk being criticised for having them, and being criticised if you don’t.

Amber Rudd, having initially denied that targets were being used to manage immigration reduction numbers and bring down the net migration figure, discovered the harsh, dark side of targets via a media storm that targeted her as well as targets themselves.

So Rudd announced that if she found out that targets were being used to manage immigration she would put a stop to the practice. Then it turns out that for some years targets had been used by Theresa May herself when Home Secretary before Rudd. Was Rudd’s main mistake to deny the use of targets and then be found out? What’s up with targets? Do they deserve a bad name?

Scared by a rise in the popular vote for the UK Independence Party in the run-up to the 2010 election, the Conservative party had pledged that, if re-elected, it would implement a strict immigration policy. It would reduce net migration to under 100,000 per annum and would repatriate illegal immigrants.

Operation Vaken was born, creating a more ‘hostile environment’ – a phrase first introduced by the Labour Home Secretary Alan Johnson – and bringing the notorious ‘Go Home’ vans to areas of London where the number of illegal immigrants was presumed to be highest.

Those vans were the subject of much outrage and criticism – and the pilot scheme lasted just three months. What was less in the public consciousness was the strategy of setting targets to increase the rate of enforced deportation. Whilst the aim of ‘fewer than 100,000 immigrants per year’ seemed to have considerable support from certain parts of the electorate, the targets for repatriation were subject to less scrutiny – until, that is, the evidence of their damaging consequences hit the headlines.

Particularly harsh was the treatment meted out to the ‘Windrush’ generation, given indefinite leave to remain in 1973. Not everyone who stayed applied for British citizenship, which means they lacked an official record of their legal status – and officialdom destroyed many arrival documents that would have supported their case.

Fastforward 50 years since SS Empire Windrush first arrived from the West Indies, and the scandal emerges that zealous officials have deemed ‘illegal’ many of the children of the early immigrants, who cannot meet the impossibly high standards for acceptable documentary evidence of residency, causing enormous distress.

The problem with targets is that they incentivise biased decision making. In responding to targets, the decisions of staff in immigration centres are shaped by the climate and strictures imposed by their political masters. Capita, the private company subcontracted to the Home Office to enforce ‘removals’, was required to report monthly on its performance against its targets. Failure to meet the target risks a poor-performance black mark for the local office, the particular official, or the contractor. More pressure may then be brought to bear, and reputations, careers and contracts are put at risk.

The whole point about targets is that staff focus on hitting their target instead of enquiring sympathetically and fully into the complex realities of their subjects’ lives and families. ‘Undocumented’ becomes synonymous with ‘illegal’, ratcheting up the hostility factor and poisoning the public discourse. As a result many people lost their employment, were denied benefits, were faced with charges for NHS treatment, or were deported.

When politicians could no longer ignore the existence of many cases of hardship and harsh treatment of people who were deemed to be ‘illegal’, Rudd was required to appear before the Home Affairs Commons Select Committee, some members of which had been lobbied by individuals from their own constituencies who were facing hardship.

Amber Rudd gets a grilling

Under intense questioning by MPs, Rudd first denied that there were departmental targets, then revealed that she didn’t know whether or not targets were being used. She didn’t seem to have given the matter of targets much thought. She was uninformed of what was happening in local immigration offices. She appeared unaware of the pitfalls of targets and their potential for controversy.

The facts that emerged were that the official Home Office Weekly Immigration Enforcement report dated August 2013 (when her boss Theresa May was Home Secretary) stated that as well as local targets, removal was measured on a nationwide basis. By the second week of August 2013 the number of people who had been removed so far that year was 5% below what was referred to as the ‘expected performance’. A report gave further evidence of target setting, saying the enforcement subcontractor Capita’s ‘Removals Casework Family Returns’ team “has exceeded its removals target for July, removing 16 families against their target of 12”.

Further evidence of targets came in a leaked secret internal six-page memo prepared for Rudd, Brandon Lewis (the then Immigration Minister) and other senior ministers by Hugh Ind (Director General of the Home Office’s Immigration Enforcement agency). It stated that the department has set “a target of achieving 12,800 enforced returns in 2017-18” and boasts that “we have exceeded our target of assisted returns”. It added that progress had been made on a “path towards the 10% increased performance on enforced returns, which we promised the home secretary earlier this year”.

But the Government’s tough stance and harsh policy backfired in the face of a media storm and stories of real hardship. It appeared to be more interested in seeing targets being met (which would go down well with some voters) than in fairness for individuals. When targets are hit by officials who are urged to be biased in their decisions and actions, and an unfair case attracts criticism and shame, the media then turns on the responsible minister. Rudd came under relentless pressure. The hostility stories were raising a question-mark in the public’s mind on ministerial and government competence, probity and ethics.

What does a leader do when faced with this kind of situation? She blames the local officials for setting their own targets and “for losing sight of the individuals affected by the immigration policy”; that is, those seeking to establish their right to remain in the UK. Such top-down criticism of officials is unfair on the less zealous officials.

However, the outcomes were not something that could reasonably be laid at the door of local officials who were charged with implementing the politicians’ policy. The repatriation targets were politically motivated by a desire to appeal to loud voices in the population. And as a strategy to meet expectations, it made a certain sort of sense to subcontract decisions and enforcement, putting a convenient distance between the policy makers and the implementers. But there are iniquitous consequences. In weighing the evidence in individual cases, the contract primes officials to meet the expectations of the Home Office. This puts them in a double bind. If they act fairly, as they are told they should, they may fail to hit their targets and thus fail to fulfill the terms of their contract.

Rudd became aware there was a system problem

To Rudd’s credit she did admit to having noticed – somewhat belatedly – that there was something going on systemically. In terms of the popular fishtank metaphor, she had discovered – to her apparent surprise and dismay – that the fishes’ water was toxic (which government policy wanted it to be anyway, at least for so-called illegal immigrants). But such toxicity extended to the officials who are required to bias their assessment in order to produce numbers that would not otherwise be achieved by the system alone. There is pressure, discomfort and pain there too.

Another thing. Targets’ inherent suppression of nuance makes it more likely that inconsistencies will arise and leak into the public domain. If officials had been freer to use their judgement and investigate cases fully, you would have fewer cases of injustice. The use of targets inevitably leads to more horror stories bubbling up and getting out.

In a Damascene moment it became clear to Rudd that it was not sufficient for her to see the fish as the sole problem – whether the fish were the immigrants or local officials. Rudd needed to do something more than simply intervene in a handful of high-profile individual cases of blatant injustice that were receiving embarrassing media attention. She needed to address the system issue and do something about the choppy politicised waters that people were being required to navigate. Having realised this, she tried to change direction quickly, putting a stop to the practice of local target setting. But by then it was too late and not enough. The pressure against her for ‘misleading the House’ led rapidly to her resignation and reputational downfall.

For further advice and assistance, download the website resource How to See the System you are in for free.

Follow this up with How to Improve the Health of the Fishtank, which you can purchase from the Resources Centre.

Also available from the Resources Centre is How to Conduct Governance Systemically – which is particularly appropriate in the light of how the immigration policy has highlighted governance issues for both the Home Office and the Government. We look at governance next week.

In the meantime, download a summary of the pros and cons of targets Lessons about targets.