What is your direction of travel? 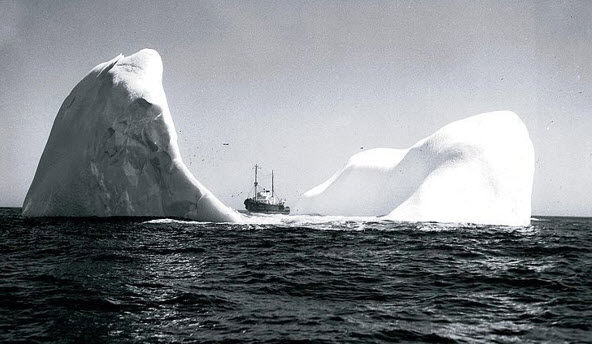 Every day, UK newspapers are full of stories about Brexit, and rightly so – this is a vitally important matter. But the political discourse is stranded. Voting doesn’t deliver a clear or satisfactory conclusion or bring forward movement. Something different is needed.

Most reporting focuses on battles being waged: between Parliament’s House of Commons and House of Lords, and between parliament (legislature) and government (executive), not to mention wars within the government and cabinet. The system of governance is plainly stuck. The latest bust-up is over the right of the UK Parliament to be heard and have its view respected and taken into account.

These battles say something about leadership, its capability, process, decisions and relationships. Among the questions behind the questions are: where does sovereignty reside? who initiates, sets the agenda, influences and controls? and where is power most dominant and how is it being deployed?

If Brexit is about regaining sovereignty for one of the world’s oldest parliamentary democracies, how can parliament be deliberately sidelined by the government? Yet that is claimed to be happening. If Brexit is about regaining control over unelected officials, then note that MPs are elected, while government ministers are appointed. Even the prime minister is appointed by her party and anointed by the Queen, and the PM chooses who to appoint to government jobs. So what is a healthy balance between parliament and government?

Other countries’ constitutions do things differently. In the United States the elected representatives vet and approve government appointments. Congress can bring forward its own legislative bills. In the UK the separation of powers is more divided and a matter of history and tradition rather than formal constitution. While the prime minister acknowledges that the government is accountable to parliament and has to seek its support, she wants to keep its wings clipped. Parliament can dispose but not propose.

Such differences and inconsistencies aside, I’m interested in the power aspect and how well it is exercised and balanced. Remember that once hierarchical power was exercised by the monarch. Charles I miscalculated the public mood and had a bad head after that. The Parliamentarians won that battle. Now, in their turn, they complain that their own voice is not being sufficiently heard. The executive branch has grabbed the power. How ironic that is. Ministerial fiat is all too common, though Trump sets a new standard. Ayn Rand would be proud (see recent newsletter).

The current spat is focused on an event: that is, a vote to be taken in parliament at a given time on a given resolution. The particular issue at stake is the former attorney general Dominic Grieve’s amendment aimed at ensuring that ministers “cannot crash out of the EU by ministerial fiat”. In arguing the case for strengthening parliamentary power on this matter, or alternatively voting down the amendment so as “not to tie the prime minister’s hand in negotiations” (an argument she won in the vote) the risk is in not seeing the trend and the wider pattern. Once you look more widely than the event, instead of simply concentrating on the issue in hand, you might then respond differently, that is, by addressing the underlying pattern. In thinking systemically about an organisation’s dynamics the subject of patterns is crucial.

Talk to government ministers who were previously backbench MPs and they say that the executive is too powerful. But once appointed to government, ministers want their dominance unfettered. It is this pattern that needs shifting generally, for all of the time, notwithstanding that challenge and accountability is such a nuisance, but because it is. Otherwise power, ego and fiat take over. Just think of last week’s G7 talks in Canada. So ask the question: for the good health of the system, what direction of travel should we be embarked on?

Such power differences are not limited to the political world. Some company chairmen and chief executives of British businesses resent the presence of non-executive directors on company boards; they are either too weak and uninformed in which case pointless, or the opposite and a challenge to the real executives’ authority. So claimed one prominent FTSE 100 chairman who lost his job following a bribery scandal.

In the 2016 election campaign, Theresa May said there had to be changes to the way UK companies were run. “If I’m prime minister,” she said, “we’re going to have not just consumers represented on company boards but workers as well.” Lobbied by the bosses-backed CBI (Confederation of British Industry), she changed her mind.

Peter Senge (best known for making systems thinking the fifth discipline of a learning organisation) uses an iceberg metaphor to make the point that we usually only see and react to events; i.e. what is above the waterline. The bulk of the iceberg sits below the waterline. Charles Hampden-Turner illustrates it like this: 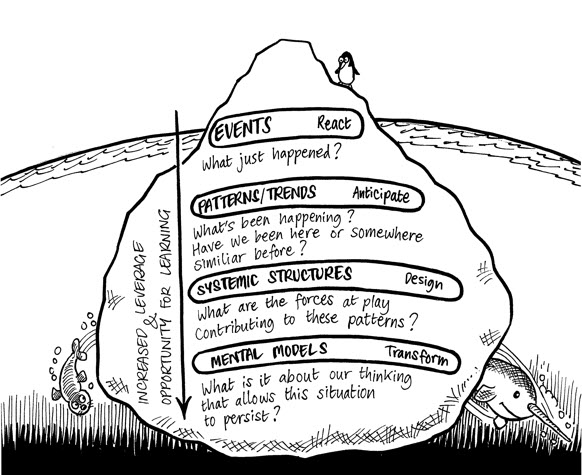 The iceberg helps us analyse and interpret what is going on systemically – in this case in the nation’s governance arrangements. It prompts us to recognise the current trend and the required direction of travel that would lead towards a better balance of power in the system, improved relationships and more constructive debates between the players. It helps redirect us towards those changes we need to make that go much deeper than how a particular motion will be tabled and voted upon.

In his latest book The Crisis of Western Capitalism (due for publication later this year) Charles Hampden-Turner says:

None of this can be tackled unless we examine our own mental models, the deepest layer in the illustration, which have shaped the systems underlying these patterns. The very fact that we take events so seriously comes in part from the way we see the world, as particles not waves, parts not wholes, as an earth to be dominated not nurtured and sustained. If we seek to make fundamental changes to our culture then we need re-examine what many of us have taken for granted much of our lives. Cultures have deeply embedded assumptions and some are more favourable to creating wealth and to innovating than are others. In order really to learn we cannot just ask ourselves “does this person come up to scratch?” We need to ask “does scratch come up to the endowment of human beings? Should the model itself be changed?”

Westminster is failing Charles’ ultimate test (just as his namesake did in 1649. He wasn’t up to scratch.) More importantly, what it means to be up to scratch itself needs rethinking. And that seems to be true of leadership everywhere.